I must confess that I have never seen an episode of Pokémon. But when I saw my social feeds cluttered with news that the Pokémon Go app had launched in Australia, and had friends ask me if I wanted to go hunting, I wanted to see what all the fuss was about.

Here is why I got caught up in all the fuss that is Pokémon Go:

2. A sense of community.If you have been out and about, the reality is that you have noticed groups of teens and adults that are hanging out in cars, and around the city or certain landmarks in the suburbs. They are not just snap-chatting, tweeting or texting – they are huddled around PokéStops to either collecting Pokemon or stock up on Poke balls for their  next hunt. Seeing groups of people of all ages, all races and genders huddled together makes it feel like a sense of unity is taking place. The wave of excitement that you hear when someone spots a rare Pokemon has to be seen to be believed. And, while you are at Stops, you will be hanging out with other Pokemon Trainers, and while you are in between collecting Pokemon you can have a chat to the person beside you while you are geeking out. Make sure that person wants to chat though!

3. Your world is the landscape of the game. This is the first augmented reality mobile game and boy, did they do a good job of it. Seeing your house, workplace, school or surrounding suburbs as a backdrop to sprouting these creatures makes your world new again. It is getting even the most introverted gamer out of their house and walking – and that can’t be a bad thing. So many normally Vitamin D deficient young people are clocking up kilometres in order to get their ‘egg’ to hatch or to head to the nearest PokéStop.

4. The camera mode. This is me collecting a Pokemon in the loungeroom: 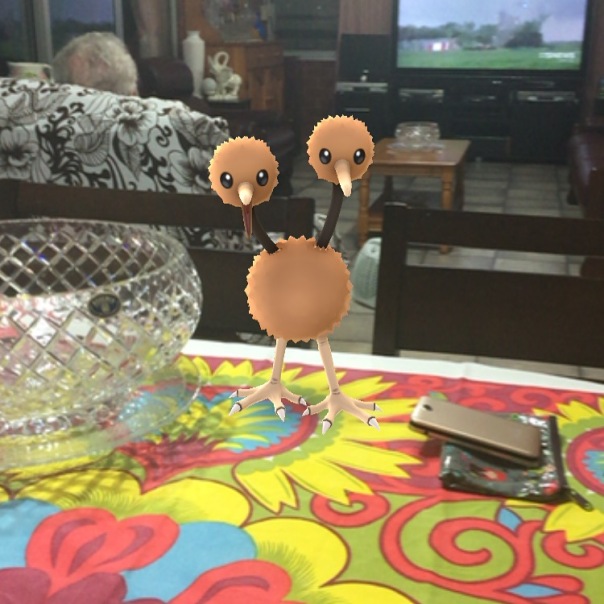 And at a PokéStops:

5. It is not really about Pokemon at all – I may not know what any of the Pokemons are called (but how cute is the Pikachu? and my favourite – Ponyta) until I they pop up on my screen, but I still get the same level of excitement. It is addictive. You want to catch them all – just like the tagline says.

So give it a go and you may find yourself getting out and collecting Pokemon – and loving a reason to explore your neighbourhood.

Tell us what you think! Cancel reply

This site uses Akismet to reduce spam. Learn how your comment data is processed.

A digital content consumer with a love for social media. Also a self-confessed geek, doggies fan, Harry Potter fan, and a tourist in her own city.